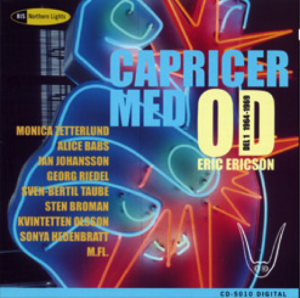 – In the early sixties the decade was young and people were enthusiastic about anything new. Sweden’s Orphei Drangar (OD), an all male choir founded in 1853 changed the formalities of concerts, talking to the audience, allowing laughter and introducing the idea of the ”Caprice” in 1962. ”Caprice” means ”whim” or idea, and it is intended to suggest what is improvised and playful in concerts. The general public longed for such entertainment. Things have changed radically since then, but the basic ideas, surprises, playfulness and high seriousness, craziness but with a requirement of musical quality. ”Certainly the lads go astray at times,” but nothing ventured, nothing gained. This CD is a ”best of” these Caprice concerts, from 1964 to 1969. Unannounced guest artists were a fundamental idea. These included Sven-Bertil Taube, a small ensemble from the choir called the Olsson Quintet made a celebrated debut. Sten-Gunnar Hellstrom presented his condensed version of Swedish musical history, composer Sten Broman was released in his purple tux, and talked for a quarter of an hour about 2 songs with a duration of 3 minutes. There are 22 songs, ending with G. Wennerberg’s ”Slut Godnatt,” an amorous lover’s ”Wake Up” serenade (to make sure she was not sleeping, leaving him to sing love songs uselessly to himself). All live, in Swedish and in some English, with some light accompaniment and quite a bit of audience laughter. We wish we could understand some of the jokes, but some bits, like ”Dolly,” ”Embraceable You,” ”Domardansen” and ”Beatlespassion” give us a pretty good idea of what’s going on. Interesting concept, with some good music and funny stuff.